There Are 4 Steps To Playing Rhythm Successfully ! 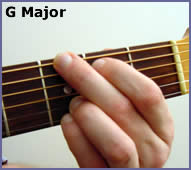 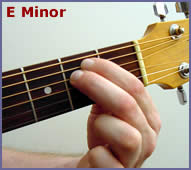 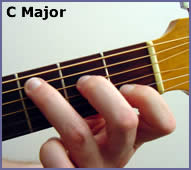 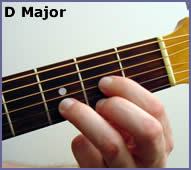 It is made up of eight bars of music, the first two bars are the chord "G" and the second 2 bars are the chord "E minor". Then one bar of "C", one bar of "D" and again two bars of "G". There is a repeat sign on the end that tells you to go back to the beginning of the music once you're finished. As you can see in the illustration the 2nd, 4th & 8th bar has what looks like a percentage sign in them (%). These are not actually percentage signs, but they mean to repeat what was ever in the last bar. It may not seem like much use to put them in now, but if the bar before was a intricate piece of music, then it becomes a little bit easier just to put a repeat sign rather than rewriting the whole bar again.

To Help You Change Chords Quicker, Look For Fingers In Common

The fingers that stay in the same position from one chord to the next are knows as the Pivot Fingers.